At 5:45pm on Tuesday 12th November I looked out across the London skyline from the 8th floor of an investment bank building in Finsbury Circus, London. As you might imagine, not where I’d usually find myself on a rainy Tuesday evening.

However, this evening was different, I was attending The Tablet Event “A view from Rome”, which featured Shelagh Fogarty in conversation with Christopher Lamb. Shelagh Fogarty, journalist, radio and TV presenter and Christopher Lamb, The Tablet’s Rome correspondent and BBC commentator spoke to an audience about recent events in Rome. The main focus of the conversation was around the controversy caused by the two Popes currently residing in the Vatican. Pope Benedict XVI and Pope Francis both live and work in the Vatican despite Benedict’s resignation. This causes its fair share of problems, as both Popes have supporters within the Vatican.

Pope Francis has a very different approach to his role as head of the Catholic Church. His appointment was unexpected, he is the first South American Pope. Since becoming Pope, he has appointed Cardinals from around the world, increasing diversity in the upper echelons of the church. Some of the work he has done has been met with resistance to change from within the church: Francis is keen to bring the church to developing countries, such as China. Francis adopts a fairly liberal style, causing traditionalists to favour Benedict’s more conservative ways.

The Amazon Synod, held in October 2019, is another example of Pope Francis’ desire to reform the church. Topics discussed at the Synod included ordination of married men, a greater role for women in the church, and for the church to stand with the poor. At The Tablet event, Christopher Lamb discussed Pope Francis’ call for ‘Synodality’ (continual assessment of the direction of the church at local level) and an emphasis on the church being living and dynamic, and not static and stubborn.

Another issue discussed at the event was the symbolically important ‘wearing of the white’ in the Vatican, by both Francis and Pope Benedict. Before Pope Benedict announced his resignation in February 2013, no Pope had resigned since Gregory XII in 1415, so it is no surprise that it caused much upset amid the church. However, when Benedict resigned, he chose not to use his birth name again, but to take the title ‘Pope Emeritus’ and to continue to live in the Vatican, while his successor Francis took the title of Pope, sparking rumours of rivalry between the two.

Overall, the event was very interesting and informative, as well as being funny and engaging and I enjoyed it a lot. It also made me aware of many of the issues inside of the church today, and the problems faced by the church moving into the future. 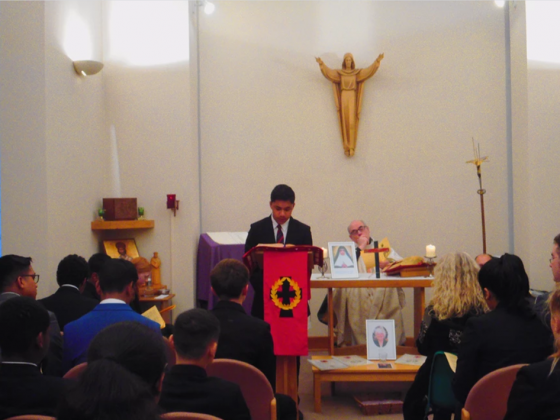 Mission: to think about what God might be calling you to do